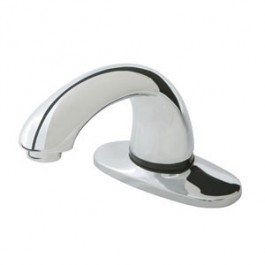 Millions of gallons of water are wasted every year through faucets that are left running for too long or not closed properly after use.

Simply going through the daily early morning routine of personal hygiene, cleaning one’s teeth, washing the face, etc, sees gallons running unused down the drain because few people think to turn the water on and off during this process.

Installing motion sensor faucets will reduce this kind of waste by stopping the water flow every time the hands are removed. So instead of the water continuing to run while teeth are being scrubbed, it stops until it is time to rinse. The same applies to the process of soaping the face and body.

This naturally makes saving water more convenient. Rather than having to turn the faucet on and off every few minutes, or trying to to feel for the faucet with a soapy face and hands, the faucet does the work and supplies the flow as soon as hands are placed beneath it.

This also makes personal hygiene fun for kids, as few young children can resist the magic of water appearing ‘all by itself’ as soon as they place their toothbrush under the tap each morning and before bed at night. Even the simple concept of health and safety, namely washing their hands, becomes a fun adventure and will most likely be undertaken much more willingly when it no longer involves often hard to open and close faucets.

It is believed that installing motion sensor faucets can save as much as 30% to 50% on overall water use, a saving that should not be taken likely both on financial and environmental cost.

Motion sensor faucets are not just about saving water, however. They also play an important role in personal hygiene and general health and safety. Everyone washes their hands, whether using the restroom at home or while out and about.

In public restrooms in particular, people generally ensure that their hands are washed carefully before leaving the restroom. The problem with ordinary faucets is that not everyone will use a paper towel to turn the faucets on or off.

So germs that are transmitted onto the faucet before washing the hands are picked back up again after washing, essentially defeating the object of the washing. Motion sensor faucets eliminate the need to touch them, thereby reducing the risk of spreading or picking up germs.

This is as applicable at home as it is in public restrooms. Kids are taught to wash their hands after playing in the garden. Unless their mother is ready at hand with disinfectant every time they do this, the same germs they brought in and carefully washed off will be picked up again from the faucet as they close it.

It is clear that motion sensor faucets have two major benefits justifying their installation. They not only save huge amounts of water, they also reduce the risk of spreading disease.