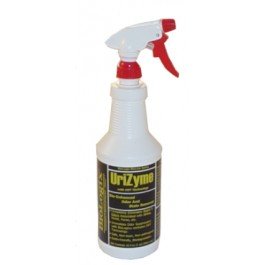 Urine odors can linger long after cleaning the area that was wet. The same is true of vomit, blood, feces, pet odors, and grease smells. The pesky odors seem to pervade the entire area causing embarrassment when visitors come to your home.

No longer do you have to suffer embarrassing odors in your home. Natural cleaning agents made from enzymes and microorganisms are available that do not simply mask the smell, but in fact get rid of the source of the odor.

UriZyme is scientifically formulated to attack the source of urine odors, pet odors, and other organic odors through a synergistic blend of microorganisms and enzymes. Instead of masking odor, UriZyme provides a means of natural cleaning which is biodegradable, non-toxic and safe to use anywhere in your home.

The odor suppressing technology used by UriZyme gets to the source of the urine smell or other offending odor and breaks the source down, virtually consuming the molecules that cause the odor.

If you have a new pet in your home, UriZyme is a “must-have” during the potty training process. Even the best new puppy or kitten will have accidents as they learn where their human family wants them to relieve themselves. Chlorine bleach, pine cleaner products and many other cleaning agents do not get to the source of the urine smell, but UriZyme begins to rid the smell on contact.

If you have an invalid in your home or a person with incontinence, UriZyme is perfect for cleaning mattress pads, bedding, clothing, even the mattress itself. No long do you have to dread having guests arrive to visit with a family member that can not maintain control of their natural body functions. Simply clean the odor away permanently. You do not have to fear that harsh chemical may cause skin rashes or other reactions UriZyme is safe to use even for cleaning undergarments that come in contact with sensitive skin.

UriZyme is recommended for use in nurseries, day care centers, nursing homes, rehabilitation facilities, gyms, hospitals, sick rooms, kennels, veterinary clinics, pet areas, and anywhere else that biological odors may be present. By attacking the source of the odor, UriZyme prevents the organic matter from releasing any odor, so you have no more urine smells, feces odors, vomit smells, lingering perspiration odors, or other organic-based odors.

UriZyme is produced without cruel animal testing of any kind, making it a cruelty-free product. It is also a world-safe eco-friendly product, which contains no harsh chemicals or corrosive agents and is safe enough to use around babies and children.

So, whatever the source of organic odors in your home or business, you can turn to UriZyme to naturally rid odor at the very source.