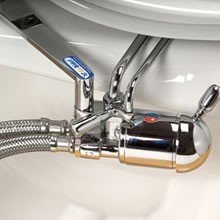 Large numbers of households have septic tanks, which typically consist of two main components, namely the actual septic tank and the so-called drain field, or a land drain system.

All the waste water drains from the house into the septic tank, which is designed specifically to retain the waste water long enough to allow any heavy solids to sink down and settle at the bottom. Here bacteria will partially decompose those solids and form sludge.

Lighter particles, grease and oils float to the top, where they form a scum-like layer. So-called baffles installed on both the tank’s inlet and outlet are designed to stop this scum and the sludge from escaping. Many newer tanks also have a partial wall, made from either plastic or concrete, to prevent sludge from being forced out and into the drain field.

The water, free from solids, grease, etc, is allowed to exit through the outlet into a system of underground, perforated pipes, from which it slowly seeps into the ground.

If the blockage happens somewhere along the way out of the house, slow flushing toilets and very ugly back-up of waste can occur. Whoever had to ever unblock a blocked toilet will testify to how nasty this can be.

Blockages in the outlet are just as nasty and can eventually lead to so much pressure that both sludge and scum are being forced out. The potential health risks and environmental consequences are severe to say the least.

In addition, chemicals within both toilet paper and wet wipes will neither sink nor float, but are expelled with the water into the ground, where they ultimately result in contamination of both soil and groundwater.

Some of these chemicals, like chlorine based bleaching agents, dyes in colored toilet paper, preservatives and scents in wet wipes, to name but a few, can cause serious effects on human health if they enter water supplies through groundwater resources.

To prevent this from happening, wet wipes, for instance, should never be flushed at all, but should be disposed of in trash bins. But how does one avoid having to flush away toilet paper?

The only really effective way of preventing problems caused by lots of toilet paper being flushed into septic tanks is to avoid its use altogether and use a toilet seat with a bidet function instead. This will not only prevent potential problems with septic tanks, it will also be much kinder to skin.

Toilet paper, however soft, can and will cause irritations to sensitive skin. In addition, it can not always be guaranteed that the area is perfectly clean. By using a bidet, perfect cleaning without irritation can be achieved every time. Warm air will also prevent rashes resulting from dampness.