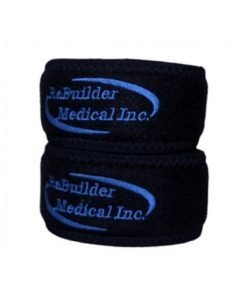 May be used for knee, ankle, wrist or elbows, up to a 18 inch circumference.

Basic Instructions on Using the ReBuilder

To enhance the effectiveness of treatment, the straps are to be used dampened with our electrolyte solution. The electrolyte is pH balanced to 7.0 to prevent any skin irritation from an overly basic or acidic blend. The proper minerals are included so that the ReBuilder’s specialized waveform can be transmitted effectively.

The annular electrodes can be used in conjunction with common adjunctive therapies, including laser, LED, decompression tables and more. Since the ReBuilder itself incorporates both nerve and muscle stimulus into its signal, there is no need, nor is it recommended, to use any other forms of TENS or EMS in addition to ReBuilder stimulation. Treatment involves 15 minutes of stimulation on the joint, followed by 15 minutes of regular ReBuilder foot-to-foot treatment to re-educate the nerves, since temporary collateral paths may have been established while the knee was traumatized.

Because the initial portion of the ReBuilder signal is not in intimate contact with the skin, its interaction with the similar sister electrode creates a Pulsed Electromagnetic Field (PEMF) with all the benefits of that technology. One benefit is its ability to cause the bones to vibrate. This vibration stimulates the bones piezoelectric property to generate its own, internally generated electrical signal that the brain senses, which has classically been used for healing non-fused bones but can also be used to release endorphins. These endorphins can mitigate local joint pain while simultaneously improving the patient’s mood.

The ReBuilder signal will also stimulate visually obvious muscle contractions in both the calf and the thigh, effectively improving circulation through the use of the venous muscle pump system. This muscle pump action will also reduce edema. This accessory is specifically designed to work with ReBuilder technology, and its patient-specific, automatically variable waveforms created through its biofeedback circuitry.

Note: The ReBuilder (either model) is required for usage on the Footbath Kit, sold separately.

There are no reviews yet.