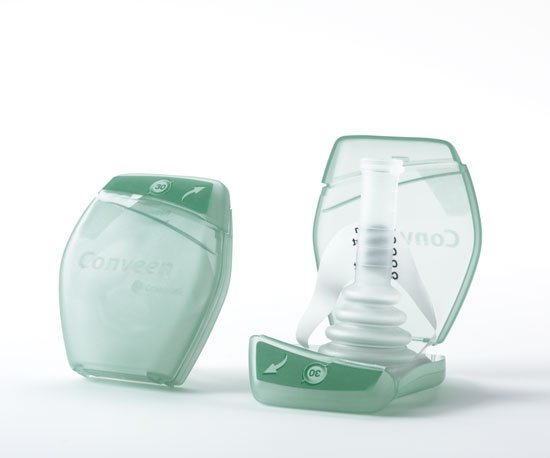 While there was a time when male incontinence required either internal catheterization or use of bulky, often uncomfortable and highly detectable incontinence pads, for instance, over the years a variety of individuals and companies began to research into different, more convenient and discreet measures to assist sufferers. It had long been known that glider pilots and long distance drivers made use of bags or similar gadgets filled with absorbent material to relief themselves during long journeys. Somewhere along the line, someone came up with the idea of using a device similar to a condom, which could be slipped over a man’s penis and attached to a bag via tubes. These first external catheters were attached to the body using straps or tape, which often proved unreliable and frequently lead to leakages due to insufficiently secure fittings. In 1989, a patent for male catheters using an adhesive coating was filed, which improved the system dramatically. These early models were, however, still far from perfect. Materials used were often unyielding or generally uncomfortable to wear. For many years, male external catheters were produced using latex, which while being relatively cheap, often caused severe discomfort to wearers due to its allergenic properties. The first company to develop the use of silicone self adhering male external catheters was Rochester Medical. From here, things have continually moved on and today a whole range of discreet, easy to apply and safe devices are widely available. While sufferers from incontinence are obviously benefiting, as these easy to fit, secure devices make it possible for them to lead a near normal, active life again, others are also taking advantage of both male and female external catheters. Many are using devices like the so-called Stadium Pal, or its female equivalent, the Stadium Gal, to avoid having to use public restrooms during sporting events, while fishing, hunting and a range of other activities, such as the Iron Butt long distance motorcycle rally, for instance. Another male external catheter equally used for such events and purposes is the Coveen Optima, a Coloplast design which offers extreme comfort through using a 100% silicone material, aloe enriched adhesive and advanced protection against leakages through a triple measure system. It can be safely said that external male catheters have come a long way since those early days of bags filled with various materials and the early, strap on rubber and allergy causing latex models.