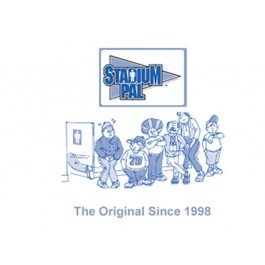 The Stadium Pal has gotten it’s share of publicity since it’s inception in 1998.  Major news media outlets such as USA Today, ABC New.com and Sports Illustrated have all done some type of story on it.  Sometimes it is a serious piece about it and other times comical.  It does almost bring a laugh when someone thinks of a person wearing a portable urinal to a sporting event.

Comedian David Sedaris has been one of the biggest reasons that the Stadium Pal is so well known.  Over 1.25 million people have heard about the Stadium Pal because of his YouTube clip from when he read his essay about it on the CBS Late Show with David Letterman.  David goes on to talk about the Stadium Pal and other ways to use it besides a sporting event.  David did a great job making a humorous subject out of our marketing idea.  Truth be told that we did not invent the device.  We just gave an existing product a new name that people seem to find easier to remember.  The home health care industry calls it a male external catheter system.  Spouses and children now find that the device they have heard people joke about is the answer they have been looking for.  Men who have had a prostate procedure find it is just what they need for their urinary incontinence problem.

We had the opportunity to meet David when he was here in Fort Lauderdale to put on one of his concerts.  It gave us the opportunity to thank him for the free press.  He let us in on his little secret.  He never actually used the Stadium Pal.  It was suggested to him by a friend as a piece he could do a story for Esquire Magazine about.  So we just want to clear up a few facts about his essay.

David said it is not ideal for everyday use.
Fact – Male External Catheters were designed for everyday use and there are plenty of men who use them everyday that can attest to this.

David mentions that the smell of urine would be noticeable.
Fact – The system is air tight when worn properly there is no scent of odor, and everyday users clean their bags regularly so that is no chance for odor to build up.

David mentions that people would be able to hear him using it.
Fact – The unit is air tight so it is quite silent.  Urine flows quietly into the bag and does not create any sounds that would be noticed.

David mentions that the adhesive lining inside the catheter was difficult to remove and pulled skin with it creating scabs.
Fact – The adhesive helps create a good seal and keeps the male external catheter on, and secure.  Removal can be difficult if the proper steps for putting the catheter on were not followed.  Removal can be just as easy as the application, and it does not tear the skin.
David mentions that it would not be a good idea for a flight on a plane.
Well that is exactly what many men buy it for.  Taking a long trip across the country or overseas is when most men find the need for a hidden portable urinal on a crowded plane to be a necessity.  The last thing they want is to need to go, and find that all the restrooms are in use, and they can not hold it any longer.  Stadium Pals are also used by small engine plane pilots who don’t have a restroom on their planes.

There is no such thing as bad press, and we can attest to that.  Without David Sedaris 1.25 million less people would know about the Stadium Pal. We just felt it was necessary to clear up some of the facts about it.  We have been selling the Stadium Pal for over 13 years, the home health care industry even longer, and if the product didn’t perform as we state, we would not be selling them